With Aros, Delyth Jenkins has created a work of resplendent beauty — a collection that finds Jenkins’ own compositions alongside some fine interpretations of traditional Welsh tunes. Jenkins’ harp is joined by the fiddle of her daughter, Angharad, on about half of the tracks, whilst her other daughter, Branwen, contributes flute to one track.
It is of course Jenkins’ own harp that beguiles throughout Aros, whether it be with a hypnotic serenity and tenderness, or bursting with flirtatious charisma. The opening tunes, “Hir Pob Aros/O’r Diwedd (Every Waiting is Long/At Last),” were written by Jenkins herself after a significant break from music where she neither learnt new tunes nor wrote anything — there is a palpable sense of relief in the exquisite melodies here, and you would do well to find a more enchanting and beautiful piece of music.

There is both a sparkling enthusiasm and intense mournfulness that permeates the tunes “A Veritable Feast/Digestif,” with Peter Stacey’s tenor saxophone providing added passion and resonance, whilst the eclectic rhythms of Dylan Fowler’s darabuka delightfully punctuate the livelier moments.

A number of traditional tunes are particularly enjoyable; the rhythmic, fiddle-driven “Rachel Dafydd Ifan” gathers a particularly pleasing momentum, with the sombre fiddle played over a delightfully undulating harp melody, whilst the harp, flute and fiddle combine in effortless splendour on the languid “Mil Harddach Wyt.”

Four tracks included on Aros are from music played by Jenkins in an adaptation of George Borrow’s Wild Wales by the Swansea-based Fluellen Theatre Company, including a spellbinding rendition of the traditional Welsh air “Ar Hyd Y Nos (All Through The Night).”

From start to finish, this is a beautiful album, brimming with poise and emotion and providing the most pleasurable of listening experiences, time after time.

Delyth Jenkins brings to this CD many years of composing and playing music for the Celtic harp. In The 80s and 90s she performed and recorded with the adventurous and much-loved group Aberjaber. This is her third solo album, after a gap of eight years, and appropriately the title means “Waiting.”

Delyth refers in the sleeve notes to “ a difficult patch in my life when I didn’t learn any new tunes, let alone write anything.” Her return to writing is triumphant: four of the 12 tracks here are Delyth’s compositions. They are exquisite and they reward repeated listening: the title track Hir Pob Aros (All Waiting is Long) conveys a powerful sense of pent-up emotion being slowly released, while the wistful, hypnotic Alawon George Borrow was composed for a theatre production. A Veritable Feast is a mellow, imaginative arrangement for harp, saxaphone and darbouka. It is a seductive piece, not quite folk nor jazz, and it has that music-for-moonlight quality that Windham Hill used to promote. The saxophonist Peter Stacey is a long-time musical collaborator of Delyth’s, going back to their Aberjaber days in the 1980s.

Delyth also brings originality and depth to her interpretations of traditional tunes. She coaxes out contrastive musical shades of light and dark, yearning or sadness. One example is the set of tunes Rachel Dafydd Ifan / Mynydd Yr Heliwr ( a superb duet with her daughter Angharad on fiddle). Hen Ferchetan is a very well known tune, but Delyth and Angharad play it with verve and fresh ear, switching tune and counterpoint between fiddle and harp. Mil Harddach Wyt is a traditional lullaby, and this time Delyth is accompanied by both of her daughters: Branwen on flute and Angharad on fiddle.

Whatever the “difficult patch” was in Delyth’s life, she has emerged from it gloriously. She has quite literally grown her own band, she has a vibrant musical rapport with her daughter Angharad, and she has matured into a composer of great ability.
Hir Pob Aros? It was worth the wait.

This meditative recording of Welsh harp music is perfect for quiet afternoons or rainy evenings. Its soothing melodies are tranquil in nature, but the tunes have backbone, substance, and strong melodic lines. Jenkins plays a mixture of her own and traditional tunes, including one four-song set that was taken from her participation in the production of George Borrows’ play, “Wild Wales”. The recording is divided between solo pieces and others on which she’s joined by daughters Angharad on fiddle and Branwen on flute. Jenkins’ understated playing style is what holds all this together, and it’s easy to see why she’s considered one of the leading exponents of the Celtic harp.

A resurgence in traditional Welsh folk music is a feature of the summer’s new releases. Aros (Steam Pie Records SPCD1111S) is the latest album by Delyth Jenkins, one of Wales’s leading Celtic harpists, and includes original new work, such as the haunting “Hir Pob Aros/O’r Diwedd” which opens the album. Especially interesting are the tracks inspired by her participation in Fluellen theatre’s production of George Borrow’s Wild Wales. Accompanied by her daughters, Angharad and Branwen, on fiddle and flute, and Peter Stacey on tenor sax and flute, this is an excellent addition to the rich folk music heritage.

One of Wales’s most accomplished and compelling Celtic harpists of her generation, Delyth Jenkins certainly finds her voice here and she does so without singing a word. Her voice is her harp. Llais is an album of two halves, the first re-examining some of her own tunes and those of an earlier era with the second focusing on a production of Dylan Thomas’ Under Milkwood by the Theatre Fluellen Company for which she composed and played entirely new works.

Of the older material Jenkins offers a new version of Trefforist Waltz adding beautiful variations, as well as a re-working of Berwyn coupled with Bryniau ‘Werddon, the former dedicated to the memory of her late father. But the real excitement comes with the Under Milkwood section that alternates spoken word with music. In addition to her own compositions for the play, we hear Julie Murphy singing Polly Garter’s Song and a choir of young school pupils interpreting Johnnie Crack and Flossie Snail.

Llais is Delyth Jenkins’ most adventurous album to date.

This is Celtic harper Delyth’s much-awaited CD for Steam Pie, and she rises to the occasion magnificently. Her Camac harp comes alive when her fingers touch it, and she weaves spine-shivering shades of light and dark. She is a truly magnificent musician and composer, too; half the CD is taken up with songs and tunes written by Delyth for the Fluellen Theatre Company production of Dylan Thomas’s Under Milk Wood. More of that, later.

Llais is Voice in Welsh. In Welsh grammar, Delyth doesn’t play the harp – she ‘sings’ it (canu), just the same as a musician ‘sings’ any melodic instrument. However, you play (chwarae) a percussive instrument. Delyth says: “Y delyn yw fy llais – the harp is my voice.”

Tracks 1 to 8 are filled with the stark beauty of her compositions, and she carefully restores a couple of traditional tunes as well (such as the pretty Trefforest Waltz.) The Doctor And The Devils promises many good things from DnA, which is Delyth and her daughter Angharad, fiddler with that fine young band Calan. Berwyn, Delyth’s composition in memory of her late father, is this tune’s second outing; Delyth was harper with the visionary trio Aberjaber, who recorded it on an album; on Llais, Berwyn melts into the familiar traditional tune Bryniau Iwerddon.

In choosing the name for this album, she was also thinking of the Voice in Thomas’s play. Delyth lives in Mumbles, and it is very much a Swansea interpretation; Peter Richards of Fluellen reading the part of the Voice, and Swansea legend Kevin Johns reciting the Reverend Eli Jenkins’ Sunset Poem. Delyth’s daughter, Angharad, plays fiddle in the children’s rendition of Johnnie Crack And Flossie Snail, and fernhill singer Julie Murphy gives her all in a smouldering, sad Polly Garter’s Song. Of all the countless Milk Wood productions, this easily has to be the best and the most moving.

All artists were at The Morgan Room to promote brand-new Steam Pie CDs, Llais and Pwnco, to which they have just put the finishing touches. Delyth took the stage, and she quickly grasped the audience’s attention with her quiet command of the Celtic harp and her exploratory writing, which has taken her on a voyage of collaboration with the Swansea-based Fluellen Theatre Company.

Delyth and her solitary harp worked wonders, and she hypnotised the audience with her artful playing. A highlight was a piece she composed for Fluellen’s interpretation of Dylan Thomas’s Under Milk Wood, Captain Cat Sails The Sea. She finished an all-too-short set with Berwyn, a tribute for her father, and Bryniau Iwerddon (Hills Of Ireland). 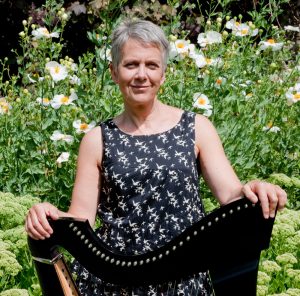