Delyth Jenkins, as the name of her album Ar y Ffin suggests, is a border girl.

She was born and raised in Oswestry, known as England’s Welshest town. Always proud of her Welsh roots in rural Montgomeryshire, it was only after she moved to Swansea to go to university that those roots really began to pull.

She started to learn Welsh, the language of her family, but which, following the fashion of the time, had skipped a generation. And it was in her early twenties that her interest in Welsh traditional music was awakened, and she started to learn the harp. Unable to find a teacher who specialised in traditional music, she learnt through listening to others and through experimenting. As a result she has developed a style of playing that is very much her own.

Soon after taking up the harp Delyth became a member of the Swansea-based group Cromlech which, under the leadership of Tommy Jenkins (no relation), was one of the pioneering groups in the Welsh folk music revival. And then, with Peter Stacey and Stevie Wishart, she went on to form the highly acclaimed instrumental trio Aberjaber.

Both as a soloist and as a member of various groups, Delyth has toured throughout the UK, in many European countries, and in America.

Her latest collaboration is with her fiddle-playing daughter Angharad Jenkins, who also plays with the hugely successful Welsh folk group Calan. Together, the mother and daughter duo are known as DnA: Delyth & Angharad Jenkins, and their debut album Adnabod  (fflach:tradd CD347H) was nominated for the 2014 Welsh Album of the Year.

Delyth’s career has also taken in the world of theatre. She has worked as a composer, actor and musician for many theatre companies in Wales, including the Torch Theatre, the Sherman Theatre, Theatr Peña and Fluellen Theatre Company.

In 2014 Delyth collaborated with the poet Emily Hinshelwood to create and perform the show Salt On Our Boots, which explored their respective creative journeys along the Pembrokeshire Coast path.

As well as performing in more formal concert settings, Delyth also plays at weddings and other functions, and leads Welsh music and harp workshops. 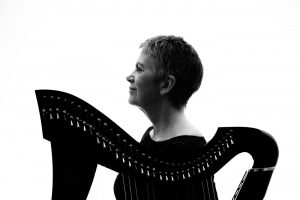 What’s in a name?

Just to avoid any confusion… At the beginning of her career Delyth used her maiden name of Evans for professional purposes, but after one too many discussions with the bank (and also an American airline!!) about her identity, she decided to use her married name for both personal and professional purposes.